15 of the Best Public Golf Courses in America! 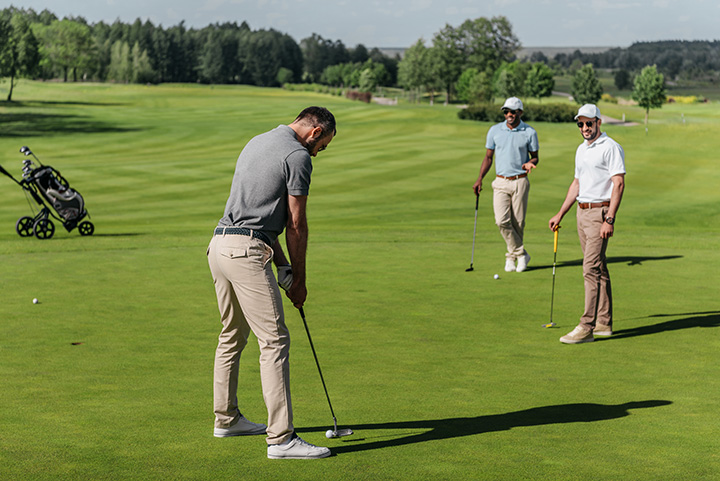 Golf was invented somewhere around 1457, making it one of the world's oldest sports. And for those who valiantly face the sand traps, water hazards and unforgiving fairways, it seems like it takes a lifetime (or more) to master the game.

No doubt, golf is addictive. President Woodrow Wilson played in the snow, using black golf balls. Astronaut Alan Shephard used a six-iron to hit a ball on the moon. Actor Samuel L. Jackson has a clause in his contract allowing him to play twice a week during a movie shoot.

Golf is so popular in the U.S. that almost half the courses in the entire world are set within these 50 states. About 12,000 of them are open to the public - which is a good thing: of the 26 million golfers in America, 9 out of 10 play public courses. Here are 15 that are worth checking out.

It's built on the site of an old farm, and offers two different, but challenging, experiences. The front nine holes are very open, so the wind can throw unexpected curve balls; the back nine winds tightly through trees. While you're deciding which club to use, take in some pretty gorgeous views.

As one of the top (and most difficult) public courses in the country, it attracts players all over who want to take it on. Those who've played it say they have a new respect for the game: it requires way more focus and thinking than almost anywhere else.

True to its name, it hugs the Atlantic Ocean - thus, the coastal winds hug your game. It's considered one of the most beautiful courses in the country, but one with many challenges. Bunkers butt up against sand dunes, every green has a tricky slopeâ€¦.but the views of the surf might relieve some of the pressure.

It's a little out of the way, but players rave over the many scenic holes on this course. Because ten of the eighteen holes run near the lake, you stand a good chance of losing any "zen" moments - along with your ball. The standard advice is to pack extra in the golf bag.

It offers amazing views of the Miami skyline and the tropical waters surrounding the Keys. So that may take some of the sting out of the challenging greens. No wonder the super-experienced players of the Senior PGA Tour keep returning to take them on.

6. The Old White at The Greenbrier, White Sulphur Springs, WV

Built in 1913, this iconic course still ranks as a "must" to play -especially since getting a facelift in 2007. It still retains the park-like beauty that offers both challenges (tree-lined fairways) and serenity. It's the site of the annual Greenbrier Classic.

It's a links-style course with no trees. But if you think you can play a nice relaxing few holes, take a look at all the sand and water features around you. Plus, that open design allows the unpredictable winds to take things up a notch. Hey, it's called the "Windy City" for a reason.

It's built on the site of an abandoned army base, designed to look and feel like you're walking the links in Ireland. The winds coming off Lake Michigan add to that feel, as do the rugged fairways. This picturesque course will test your game, as it has with many PGA pros.

It was developed for Oklahoma State University, and ranks among one of best collegiate courses in America. The greens are fast, the layout is challenging - but hey, if you want to compete against the youngsters, you better step up your game. Here's your chance.

The course has an "Old West" flavor, making good use of the natural terrain. Expect plenty of natural sand dunes and tough desert plants - but the greens are always in top shape. It's challenging, but not soul-destroying, and players appreciate the chilled bottled water available at every third hole.

It started out as a private course for high rollers, but is now open to Regular Joes. This oasis in the midst of the desert has impeccable greens and astonishing views of the mountains - which also means interesting elevation challenges.

It was created to provide a taste of Scotland's St. Andrews - and because it's situated on Puget Sound, you get that whole "windswept moors" thing. As you battle the breezes, painting your face like "Braveheart" might give you an edge. Or not.

Since it opened in 1919, it's been something of a golf mecca, blending land and sea in breathtaking fashion. To start, nine holes sit right above the Pacific: the views, the noise of the surf and the winds can be supremely distracting. Yes, it's pricey to play (as in, "a few hundred") - but it's a true bucket-list item for the golf fan.

This course, set atop ocean bluffs and with plenty of tangled rough, is an exhilarating challenge for (somewhat) experienced golfers. If you're just starting out, you're likely to toss your clubs in the ocean. And there are plenty of waterfront fairways to accommodate you.

The course is built over a former pineapple farm. And because Hawaii is a series of islands, expect to battle tough ocean breezes. Expect a pretty amazing view, no matter what hole you're playing. The greens are in excellent shape, being irrigated by the same system that watered pineapples a century ago.